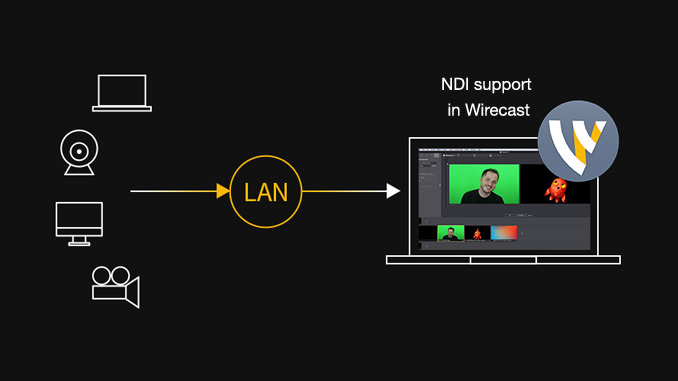 Now you can produce your live shows in a whole new way!  Wirecast live streaming production software has added Network Device Interface (NDI™) capture support with the release of 7.6.  Newtek’s high-quality, low-latency NDI protocol is a technology that makes it easy to bring IP video sources from your workgroup into Wirecast across your local network. Wirecast will automatically detect and receive any video or audio that is broadcast via NDI protocol.

This means it’s a lot easier for multiple people to work on a production together. For example, one person can be creating graphics that can be used and shared with another person who is producing a Wirecast live show on a different computer on the network.

Add high-resolution, live video from cameras, Adobe Creative Cloud apps, graphics, (such as from NewBlue Titler), scoreboards and screen capture sessions directly into your Wirecast stream from your network.

See an example of how this works using Adobe Character Animator:

Also be sure to check out the Facebook live stream by Mr. Bean  on May 3rd at  3:30pm British Summer Time/7:30am Pacific Daylight Time, which showcases this Wirecast feature. Mr. Bean will be doing charades, live with the world, via the Adobe Character Animator software and streaming to Facebook Live using Wirecast.

Let us know what you think! How can you use NDI and Wirecast to do your live productions in a whole new way?