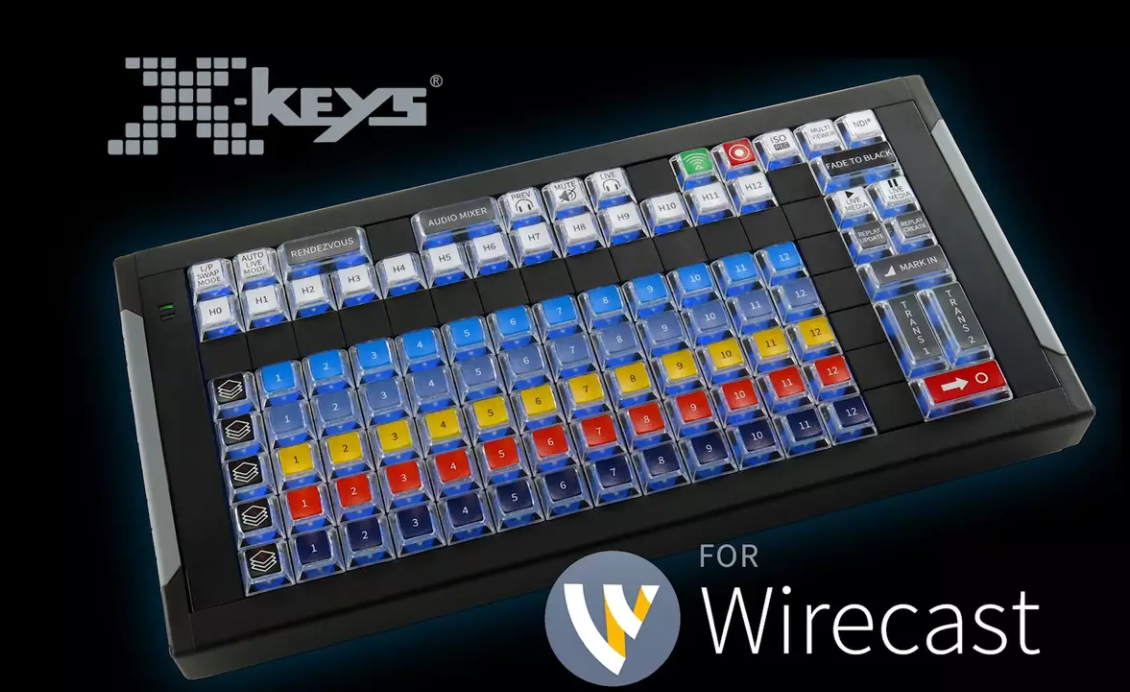 “We were thrilled when Telestream approached us about developing a custom control surface for Wirecast,” said Dan Slider, Director of Marketing. “After testing a number of models, the team from Telestream settled on our commercial duty XKE-128 as the best option for Wirecast. The result is a seamless integration with Wirecast taking advantage of all the features our device offers.”

The new Wirecast control surface offers instant access to 12 sources on each of the five layers in Wirecast. The status of each layer and source is indicated on the controller via a light behind the corresponding key. One button triggering of saved scenes, outputs, and transitions puts the most frequently used features literally at the operator’s fingertips.

“Wirecast users have been asking for a sophisticated custom control interface for several years,” noted Tom Prehn, Senior Product Manager at Telestream. “When considering the possibilities–whether to design in-house or look to an outside developer–X-keys stood out as an exemplary product. It has the features and functionality Wirecast users are looking for at a price point that makes it a great value.”

P.I. Engineering employs the latest generation of UV cured acrylic ink printer technology to instantly produce custom key sets which previously required expensive tooling and extended lead times to produce. “I was surprised at how quickly they could take the concept my team came up with, and turn it into a fully functional, professionally finished controller,” said Bryce Stejskal, Telestream Product Manager. “The people at P. I. were great to work with and our collaboration resulted in an excellent, cost-effective solution.”

Integrating with Wirecast 9 on both Windows and Mac platforms, the Telestream engineering team utilized P. I. Engineering’s free SDKs and developer support. This included a newly-released X-keys SDK for Mac OS X.

X-keys USB Control Devices
The X-keys brand of USB controls was launched in 1997 and has since earned a reputation in the broadcast industry as a flexible, reliable computer control solution. In use by all major networks, production studios, and post production houses, X-keys dedicated keys improve efficiency, enhance ergonomics, and lower training time in every creative and mission critical workflow.

Availability
The Wirecast Control Surface by X-keys is available now from xkeys.com as well as Amazon, B & H Photo, Broadfield Distributing, and other authorized X-keys dealers. In Europe, it is available from x-keys-uk.com and in Australia from rubbermonkey.

Telestream has released a free beta version of Wirecast 9, which is compatible with the X-keys controller, to be followed shortly by the public release of Wirecast 9.  Go to http://www.telestream.net/xkeys for more information.