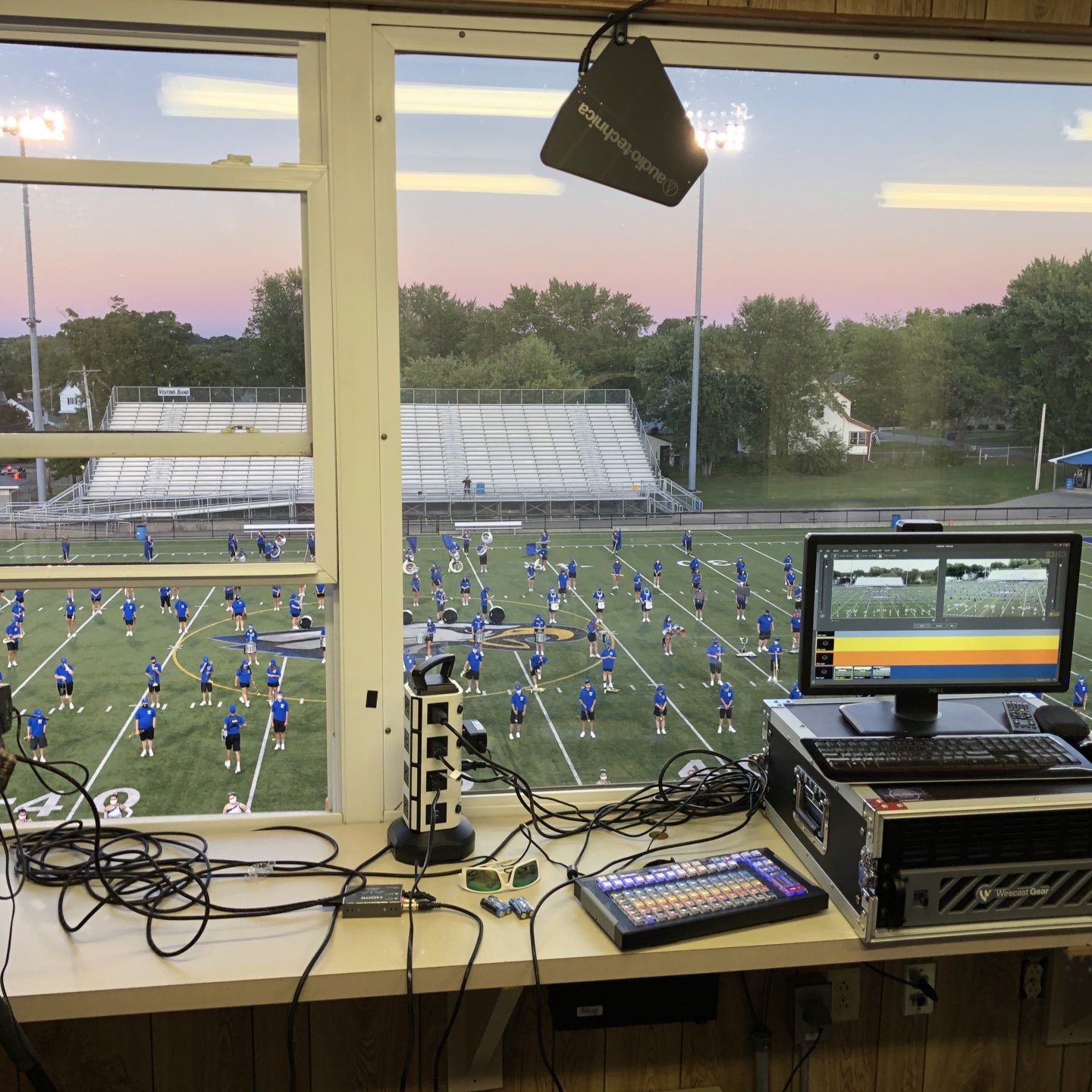 Recently I was asked to produce a production for our local high school band for “band day.” Normally this presentation is done for the parents and public before school starts but due to the restrictions with COVID-19, we were forced to have this done a little differently. A buddy of mine who works with the band, and whom I also do business with, asked if I could help. So, I said absolutely.

One of the biggest challenges going into a school function is thinking about where are you going to set up. What kind of access to electricity is there going to be? Is there a good placement for the microphone? What type of microphone should you use? How many cameras? Where can I place those cameras for good angles? Where is the presentation happening on the field? All these questions came up.

The goal was to have the kids play each piece twice. Then we could edit the b-roll and get the best takes. We decided on a 3-camera shot in Wirecast, while ISO recording each camera. We also needed a final recording of the switched production in Wirecast. We wanted some “hero” shots to edit in later, so our camera guy walked on the field to get those shots. All together we had a 4-camera production. After speaking with the athletic director, this would be the only time the whole band, including seniors, would be on the field at the same time all year. We had one chance and 3 hours to get it right. We were allowed to set up in the press box, so we had plenty of electricity, plenty of space, fortunately for my prepping, plenty of length in cords.

During my planning, I figured on a 3-camera shot with all cameras feeding into the Wirecast Gear 420, which I have conveniently placed into a flight case. This way when these types of shoots come up, I just unplug studio wires, and put the front and back on the flight case, and off we go!

The cameras I chose to bring were the Canon HFG40 and a PTZ optics 30x SDI camera. Now the third camera was provided by the school, as one of my cameras was being used for another production, and the model for that Sony camera escapes me, but it’s about a $4000 camera. Both the Sony and the PTZ Optics camera are native SDI cameras. But the Canon HFG40 is not. It’s mini HDMI to full-size HDMI, so I had to bring an HDMI to SDI converter. Not only did I bring a backup, but when you’re doing productions, and constantly bringing gear here and there, you learn, even a backup can fail. I brought 4 of everything listed. I even brought some old Canon Vixia HV40’s (3 of them) just in case we needed some interesting shots that weren’t mission-critical. I also packed 6 100-foot SDI cables because, at the time, I didn’t know how far I was having the cameras from the Wirecast Gear.

The microphone we used was a Rode Reporter microphone with Sennheiser EW 500 film G4 camera mount pack and microphone transmitter. I decided to go wireless, even though I brought a wired rode shotgun mic, because at one point during the production, the band director, had the senior captain speak to the team. In order to get his audio clearly, without running a ton of cable and a lot of leg work, the wireless picked up the audio the best and was the easiest to move around. We simply put the mic on a microphone boom arm for stability. I brought a 14-input power tower to plug everything into it. Complete with USB ports for charging USB devices. The microphone and transmitter take 2 AA batteries each, so I brought 20 brand new AA batteries as well as 8 rechargeable because sometimes rechargeable die. I also brought an internet hot spot, just in case a driver was needed last minute, or a song needed downloading to save on post-production. You can use your phone or a USB air card. I had both. I also brought along a JJC white balance filter to white balance all the cameras using the same filter.

I also used the x-keys to control Wirecast besides the usual keyboard and mouse. I also brought a headphone amplifier that allows 4 inputs. I could monitor the audio of Wirecast, but my camera guy could also monitor it. We put mine on hardwire, and his we had a 1/4 Bluetooth dongle that plugs in 1/4″ into the headphone amp, and his headphones were Bluetooth. Which gives him volume control and me. Graphics we decided to do in post, as my cameraman, is a graphics designer, video editor, and sign shop, owner. This gave him more time to be creative since we had 48 hours’ notice to get this production together.

The total setup took 45 minutes, and we had 1/2 hour to color correct cameras.

Since we were using 3 different cameras, from 3 manufacturers, keeping the color close is always a challenge. But when you get it set up and corrected when the sun is out, then the sun starts going down you have to be able to make those corrections on the fly. With 1 camera operator, and 3 cameras in the booth and him walking the field and shooting close up shots, you have to have another way to color correct as of the technical director. Wirecast gave me the ability to color correct each camera within Wirecast as the production was happening. I didn’t have to get up and move or leave the booth. Setting up the left camera to shoot the left 3/4’s of the field, the middle camera shooting from the 30-yard line to the 30-yard line, and the right camera shooting from the right 3/4’s of the field. Occasionally the camera guy would come up for certain songs and do some zooming and camera work. I also would work with the center camera. So for two guys, I think we pulled it off quite nicely.

Having an understanding and knowledge of video and what to expect goes a long way in preparation. I had more than enough gear. But it’s always nice to think about all the possible scenarios that could happen and have the gear to plan and prepare for anything.