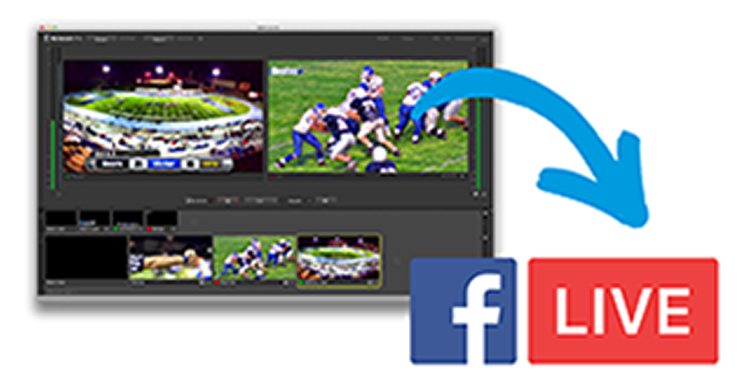 Users can switch between multiple cameras and add effects, green screen, lower thirds graphics and other production effects to their Facebook Live streams

Nevada City, Calif., April 13, 2016 – Telestream®, the leading provider of digital media tools and workflow solutions, today announced that the latest version of its popular live streaming software Wirecast now features Facebook Live as a streaming destination, allowing users to create and stream high-quality broadcasts from their computers to their Facebook timelines with just a few clicks.

Facebook recently announced the ability for all users to stream live video to their feeds through the Facebook app for iOS and Android devices. With Wirecast, users can now elevate the production value of their live videos by using multiple cameras, graphics, effects, transitions and other professional capabilities. With direct integration between Wirecast and Facebook Live, Wirecast users can publish live streams directly to the Facebook Live platform from within the Wirecast interface.

Because Facebook Live is now an integrated broadcast destination for Wirecast, once they have started streaming, users will be able to see the number of live viewers, the names of followers who are watching, and a real-time stream of comments, throughout the live broadcast. Once the broadcast is complete, the video will stay on their timeline like any other post.

Wirecast 6.0.7 featuring Facebook Live as a destination is available now as a free update from Wirecast 6 or for purchase from www.telestream.net. Prices start at $495. Wirecast will also be shown at NAB 2016 on booth SL4525 April 18-21.

More information is available at www.telestream.net.

####
Trademarked company and product names are the property of their respective companies.

About Telestream
Telestream provides world-class live and on-demand digital video tools and workflow solutions that allow consumers and businesses to transform video on the desktop and across the enterprise. Many of the world’s most demanding media and entertainment companies as well as a growing number of users in a broad range of business environments, rely on Telestream products to streamline operations, reach broader audiences and generate more revenue from their media. Telestream products span the entire digital media lifecycle, including video capture and ingest; live and on-demand encoding and transcoding; captioning; playback and inspection, delivery, and live streaming; as well as automation and orchestration of the entire workflow. Telestream corporate headquarters are located in Nevada City, California. The company is privately held. For more information, visit www.telestream.net.