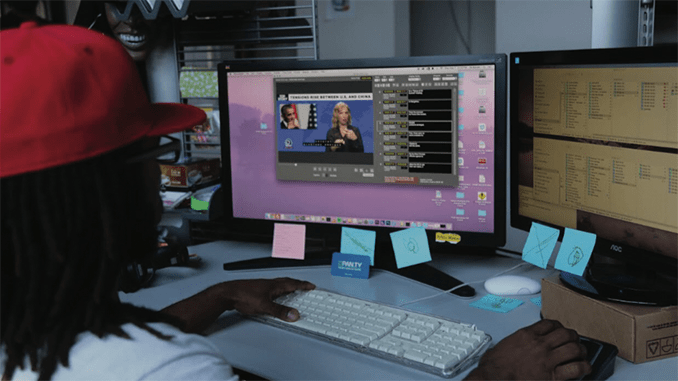 DPAN.TV uses MacCaption to create closed captioning in-house for original programming produced for the deaf and hard of hearing community.

DPAN.TV is a non-profit company co-founded by Sean Forbes and his business partner Joel Martin 10 years ago. It produces a high-volume of shows, including original video series, such as DTV News, Tru Biz entertainment news, Between the Lines public affairs, ASL Music Videos and Today in History—all specifically for the deaf and hard of hearing community.

Having grown up in a musical family, it’s no surprise that Sean Forbes is a hip-hop artist, singer/songwriter and drummer. After producing his first music video featuring his own original songs, one of the first people to watch it was Eminem. He’s also a successful entrepreneur, running an innovative online broadcast service. And oh, by the way, he’s deaf.

While Sean’s been profoundly deaf since he was one, it hasn’t stopped him from fully expressing his artistic voice and vision through music, music video performances, dance, and his online passion: DPAN.TV, The Sign Language Channel.

DPAN.TV refuses to deliver anything less than the highest-quality closed captioning for their viewers. Fresh content streams live daily, while the network’s on-demand media archive continually grows. And all of DPAN.TV’s non-live content includes closed captioning that viewers can turn on or off with a click. These captions can be created quickly in-house, and encoded right into the video, using Telestream’s captioning software, MacCaption.

With a staff of just 30 people—many of whom are deaf or hard of hearing—DPAN.TV is able to handle its own closed captioning and subtitling needs in-house on a single Mac running MacCaption software.

“Captioning video properly is an art form. With MacCaption, we have all the professional tools we need to caption and subtitle video in-house. This enables us to save significant amounts of money, labor and time, and most importantly, control the quality of the captions we produce.” – Sean Forbes

“We live in a world where video is all around us, on broadcast television, online services, social media and in public places. It’s time that we make all of this content fully accessible to the deaf and hard of hearing community. That is what DPAN.TV is endeavoring to do.” – Sean Forbes

Find out more by visiting: