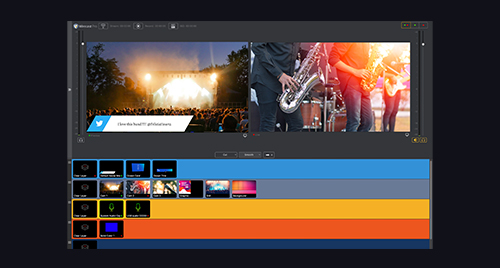 With the right live streaming software, anyone can create and send a live video stream that engages viewers on today’s popular social media sites or via their own websites. While it’s possible to just turn on a smartphone camera and start streaming video of yourself talking or showing your environs, the right streaming software can greatly enhance the look and appeal of the show.

With the ability to stream live video, it’s never been easier to share memorable events, live entertainment, and important stories with the world. Video has the uncanny ability to grab and hold the viewers’ attention like no other medium. Now, in the streaming media era, it’s become an extremely powerful, accessible global communications platform.

Whether you’re capturing and streaming video from a fixed or remote location, the Wirecast feature set combined with its exceptional encoding enables you to produce live video with multi-camera switching, live graphics and branding elements, green screen keying to create fun and interesting backgrounds, live remote guests, instant replays, scoreboards, and more. With the ability to cost-effectively mix camera feeds, NDI video and audio sources, this broadcast software gives your production greater flexibility. For example, you can use SDI-based HD cameras yet bring in graphical elements over an NDI (IP-based) LAN.

As an all-in-one live streaming production solution, Wirecast from Telestream allows users from novice to tech savvy to capture, produce, and live stream with impressive HD broadcast quality.  Unlike many streaming software solutions on the market, Wirecast runs equally well on a PC or Mac, and reliably delivers live streams provided that the host streaming computer has a robust, dependable internet connection.

With Wirecast, you have choices. Wirecast streaming software can be purchased as Wirecast Studio or the more fully featured version, Wirecast Pro. With both of these affordable solutions, users should load the software onto a computer capable of supporting high-res, multilayered video processing.

The system also requires professional quality video capture cards and graphics cards, among other components. However, if you want to hit the ground running with a pre-configured solution, Wirecast can also be purchased as Wirecast Gear, which puts the live streaming software—and all the components necessary to ensure optimal performance and processing power—into a compact, dedicated hardware appliance.

Once you plug in your production gear, starting with the cameras and audio sources, such as a digital audio mixer and microphones, you’re ready to stream like a pro. For even higher production quality, you can put a green screen behind your set and strategically place a few LED light panels around your talent.

Perhaps the most important component that makes Wirecast the best live streaming software on the market is its intrinsic live encoding capability. Users can configure the live streaming encoder with the desired bitrate, framerate, and other quality settings.

Wirecast also offers the flexibility to record the program output onto drives to facilitate postproduction editing and distribution. This program recording can be done concurrently as live video is streaming directly to one or multiple online destinations. You can even use Wirecast streaming software to spice up your Zoom engagements like we demonstrated in a previous blog post.

The bottom line is that what used to take a small video crew and expensive broadcast acquisition and production equipment can now be accomplished by a single operator with Wirecast, the best live streaming software on the market.